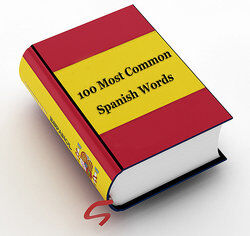 It shouldn't come as a surprise that many of the words high on the list aren't things like cellphone or computer, but shorter, more functional words like the ones you'll find below:

Prepositions are short words that express a relationship between two other words or clauses. These are the most common ones in Spanish:

See our guide to prepositions for more on how to use them in context.

Articles are short words that go together with nouns. In English, these are the, a and an. In Spanish, the most common ones are:

Conjunctions are used to join sentences, phrases or even words together. Some common conjunctions in English are and, but and or. Below are the most common Spanish conjunctions:

Pronouns are short words that substitute for nouns or nouns phrases. Personal pronouns refer to a specific grammatical person.

Verbs are very important words, as they are considered to be the core that holds a sentence together by indicating the action or happening. These are the most common verbs in Spanish:

The distinction between ser and estar is one of the most complicated issues for English speakers. Many people use the acronym PLACE to remember that, as a general rule, estar is used for position, location, action, condition and emotion.

Although both verbs technically mean to have, haber mostly works as an auxiliary verb, and can also be used to mean there is or there are.

Even though all these verbs are irregular, their conjugations are worth memorizing, as you will be using them in conversation all the time. In fact, we can already start putting the words in this list together to make phrases or sentences:

Adverbs are words that modify verbs, adjectives, or other adverbs. This might sound complicated at first, but it includes things as simple as saying yes or no. Here are the most common adverbs in Spanish:

Now that you have added some common adverbs to your vocabulary, you can form even more sentences, like the ones below:

Typically, adjectives are used to modify nouns, but they can also be paired with verbs like ser or estar to form phrases. Take a look at the Spanish adjectives that are among the most common 100 Spanish words:

Demonstrative adjectives are words like this or that, which help distinguish things from other similar ones in their class.

You can see these adjectives and how they compare in the following sentences:

Keep in mind that most Spanish adjectives change depending on the number and gender of the noun they modify. You can see this with otro, otra and otros, all three of which appear on the top 100 words list as separate entries, but are basically forms of the same adjective.

Finally, there are nouns. These are words that have functions such as serving as a subject and can commonly be paired with articles or other determiners. Let's look at the nouns that made it onto the list of most common Spanish words.

Although only three numbers made it to the list of most used Spanish words, you can find the rest on our guide to learning Spanish numbers.

A hundred words may not seem like much, but you can put them together to form a lot of different phrases. Here are some more examples:

Needless to say, this list is far from exhaustive, but you can use it as a stepping-stone on your way to learning Spanish.