Do you need some archaeology vocabulary words in Spanish? Maybe you are taking or teaching a Spanish class and you are going to study archeology. Whatever the reason that you need these words, this article will be useful to you. 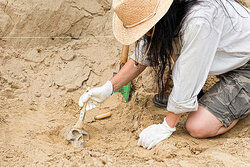 Following is a list of archaeology vocabulary words in Spanish. The Spanish word is listed first, followed by the English word and the definition. Also, some words are the same in both languages:

Now that you have a list of archaeology vocabulary words in Spanish, perhaps you would like to know about some of the archaeological sites from Spain and South America.

Can Llobateres - There were fossilized remains of an ape that was determined to be 9-10 million years old found at this site.

Gran Dolina - This site had evidence of humans from around 780,000 years ago. It is the second oldest site in Europe for human remains and the oldest discovery of cannibalism.

L'Arbreda Cave - This has evidence of Neanderthals and later of modern Homo sapiens.

Peru: Caral has been discovered to be the oldest city in the Americas, starting at about 2600 B. C. The civilization flourished for about five centuries.

Columbia: San Agustin has the largest group of huge sculptures in South America. There are many sculptures of gods and mythical animals which date from the first to the eighth century.