Numbers are a great place to start for beginner Spanish learners; they come up in conversation often, and it is really easy to get the hang of them. You can get straight to learning the numbers in Spanish right now! 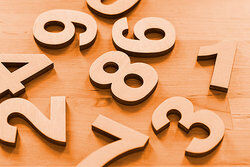 The cardinal number system in Spanish is really quite simple. Let's take a look at the numbers 1 to 100 in Spanish to see this in action.

If you are worried about having to memorize all those numbers, look closer and you will start noticing some patterns:

So, what if you are looking for a three-digit number? Those are also very simple. First, you'll have to learn how to call multiples of 100:

To read the numbers in between multiples of 100, just read the multiple of 100 and then the two-digit number that follows it. When doing this, keep in mind that the number 100 (cien) will change to ciento. Here are some examples:

Let's get to even bigger figures. Just like in English, numbers in Spanish are read from left to right. This means that if a number has 9 digits, you will first read the millions, then the thousands and finally the hundreds. Let's look at some examples and vocabulary to illustrate this:

Notice how the Spanish word "billón" sounds like "billion", but is actually a different number – trillion – in English. A billion in English is mil millones in Spanish.

Finally, keep in mind that cardinal numbers can function as both adjectives and nouns. When acting as an adjective, the number uno (one) changes to un, when describing a masculine noun, and una when describing a feminine noun. You can see this in the following examples:

Numbers ending in "-cientos" also change according to the gender of the noun they modify:

While cardinal numbers are used for things like counting or reading out telephone numbers, ordinal numbers in Spanish, just like in English, are used to indicate the position of something in a series.

You can find the most used ordinal numbers in Spanish in the following table:

When they act as adjectives, all ordinal numbers in Spanish change their ending depending on the gender and number of the noun they describe:

Now that you know the proper names for numbers in Spanish, you can move onto some other vocabulary.

Here are the names for basic math operations in Spanish:

Let's take a look at how you read some mathematical expressions in Spanish:

Although there isn't a definitive rule as to when to write out numbers in Spanish, the general practice is to use the numerical form for numbers greater than 10.

When using the numerical form, you should keep in mind that hundreds and thousands are usually separated by points or blank spaces instead of commas. At the same time, commas are usually reserved for separating decimals, although some countries (namely those closer to the US, like Mexico) use points for decimals.

Now that you know all of this, you can start incorporating Spanish numbers into your everyday life. Try counting in Spanish instead of English and soon it will become second nature! Explore a famous Spanish number you probably already knew with some fun facts about Cinco de Mayo.