Everyone has both positive and negative qualities when it comes to their personalities. Therefore, it’s important to have a good understanding of the variety of adjectives used in Spanish to describe a person’s characteristics. Keep this guide handy and you’ll have no problem describing yourself and others! 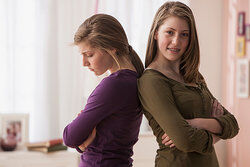 Using the Verb Ser to Talk About Personality Traits

Since personality traits are seen as constant and unchanging, the verb ser, rather than estar, is always used with personality adjectives. For example, if we were to use the adjective simpático/a, meaning “nice,” you would conjugate the verb ser in the present tense.

Remember that personality trait adjectives must always agree in number and gender with the noun they modify. Many adjectives end in “o” which means they must be changed to “a” when they modify a feminine noun. Here is an example using the adjective cómico, meaning “funny.”

Keep in mind that there are also several personality trait adjectives that are gender neutral. Many of these adjectives end in “e.” Don’t forget that these adjectives still need to agree in number. Here is an example with the adjective inteligente, meanng “intelligent.”

Also, keep in mind that some adjectives, such as pesimista (pessimistic) and egoísta (egotistical), end in “a” for both female and male nouns.

Here is a list of the most common adjectives used to talk about the positive characteristics of a person.

Here is a list of the most common adjectives used to talk about the negative characteristics of a person.

With this guide in your back pocket you will be prepared to describe your favorite, and least favorite, personality traits, as well as those of the people around you.