Pet Names and Endearments in Spanish

Spanish-speakers are often very loving and affectionate people and so it comes as no surprise that their endearing qualities are manifested in their language use. Depending on the country you visit, there may be terms of endearment that are specific to that region, however these are some the most universal Spanish pet names. 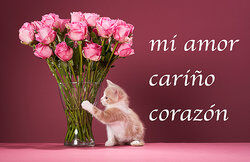 If you have a Spanish-speaking boyfriend or girlfriend, chances are you have probably heard some of these pet names. Now you can impress your significant other by giving them their own personal nickname of your choice!

Cultural Note: Almost all of these terms are also commonly used when addressing small children.

Families are very tight-knit in Spanish-speaking countries and therefore, it is no surprise that there are an array of terms of endearment used between family members. Next time you are at a large family gathering, try to listen and see if you hear any of these nicknames being thrown around.

Nicknames for close friends are probably the most regional and thus vary considerably from country to country, but here are some common ones you might hear.

Now that you are familiar with a variety of pet names and endearments in Spanish, try out a few with your friends and loved ones.