For all expecting parents, baby boy names with hispanic heritage can be both beautiful and powerful. Equally, if you are a male and find yourself in a Spanish language class and are asked to choose a “Spanish name,” you will want to choose something that embodies who you are. Here is a list of some of the most popular boy names in Spanish. 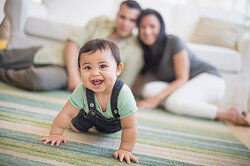 Even though they continue to move up and down the charts, these 20 boy’s names have maintained their positions as some of the most popular options over the last five years. Of course, trends in names vary among different Spanish speaking countries as well, but the ones here have broad appeal around the world. This list of Spanish boys’ names includes traditional biblical names such as Gabriel and Samuel, as well as more modern ones such as Matías and Adrián.

Other Popular Boy Names in Spanish

Although these names are not as common for boys in Spanish speaking countries, they are still strong contenders. Here you will find a variety of classic names like Antonio and Miguel, as well as more modern ones like Dante and Elías.

Now that you have a list of some of the most popular boy names in Spanish, you can choose the perfect name for your son or for yourself to use at your new Spanish language school!