Spanish Adjectives That Are Placed Before Nouns

When describing someone or something in Spanish, the adjective *almost always* comes after the noun. The important phrase to remember here is almost always - as with many rules in Spanish, there are a few exceptions. This article will discuss those few anomalies and identify adjectives that can be placed before the noun they modify. 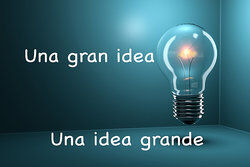 Adjectives of appreciation or admiration

When describing the qualities of someone or something we admire, the adjective oftentimes comes before the noun it modifies. When translating into English, you can think of it as adding “really” before an adjective.

Adjectives that strengthen the emotional feeling of a noun

To add a poetic undertone or an extra sense of emotion, adjectives can be put before the noun they modify. This style is mostly found in literature, however you may also hear it when someone is trying convey their emotions towards someone or something.

Adjectives that change meaning based on placement

viejo/vieja
Mi vieja amiga. → My old friend. (that I have known for a long time)
Mi amiga vieja. → My elderly friend. (age)

Possessive adjectives and determiners always come before the noun.