Fútbol (soccer) is by far the most popular sport in the Spanish-speaking world. If you want to make small talk, this is a topic you probably won't be able to avoid. 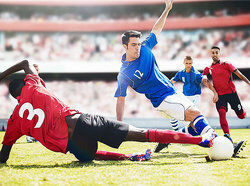 You might already be familiar with the classic long gooooooooooooooooool of Spanish soccer commentators, but it's still a good idea to learn a few more football-related words and expressions. You'll surely find yourself drawing on that knowledge quite often during casual conversations!

Before we move on to some common phrases you can use to chat with Spanish speakers, let's go over some basic vocabulary you'll need to know. We've divided these words into themed sections so you'll be able to find things more quickly. That said, keep in mind that fútbol vocabulary can have some local variations so, even though we've tried to use more "neutral" terms, you might find some variations as you speak with fans from different places.

Once you're familiar with fútbol's basic rules and vocabulary, you might want to join in the conversation. Here are some useful expressions you can learn so you don't feel left out when the topic comes up:

Complaining about the Match

Fútbol is a huge part of many Spanish speakers' social life, so learning how to talk about it will surely put you on their good side. Study this vocabulary and watch a couple of matches in Spanish so you can feel comfortable joining the conversation. Who knows, you might even end up catching the fútbol bug yourself!