Spanish and English share the same alphabet, but, if you're a new Spanish learner, you might have found yourself Googling how to change the language in your keyboard.

Why is that? Because, even though Spanish and English share most of the same letters, Spanish likes to "embellish" them with some special characters. Let's see what they are and what they do. 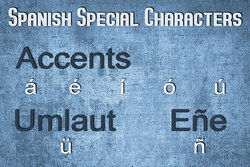 The most common of these special characters are accent marks, known in Spanish as tildes. They are used on top of vowels, primarily to mark where a word is stressed. Changing the stress of a word can change its meaning, so it's important not to miss them when you learn to write in Spanish. Since Spanish accent marks signal where a word is stressed, you will never find more than one accent mark in a word. Let's take a look at some common Spanish words that use them:

Other than to mark where a word is stressed, accent marks are sometimes used to differentiate, in writing, two words that are pronounced exactly the same. You can see this at work in the following examples:

The Spanish writing system is pretty simple, but there are a couple of complexities. One is the letter "g". In Spanish, this letter sounds like the "g" in goose when written before a consonant or the vowels "a", "o" and "u", but is closer to the "ch" in "loch" when written before "e" or "i".

This poses another problem: what if you don't want that "u" to be silent? That's where the umlaut, known as diéresisin Spanish, comes in. It is only placed on top of a "u" that's between a "g" and an "e" or an "i" to signal that the "u" should be pronounced. Here are a couple of examples:

The last "special" character in Spanish, is probably it's most characteristic one: Ñ. This letter, unique to Spanish and a handful of less widely spoken languages, is often used as a symbol of Spanish. It might look foreign, but the sound it makes should be fairly familiar. The sound it makes is similar to the ny in the English word canyon.

A few words that use the eñe are:

Now that you know what each of these characters do, don't forget to use them next time you write in Spanish! You might also want to take a look at this article about Spanish punctuation to get on your way to perfecting your Spanish writing skills.