So, you’ve decided to take the leap and start learning Spanish. Congratulations! Spanish will open up a world of opportunities and possibilities including career advancement, travel and meeting new people. During your journey, make sure to follow these 6 tips to help learn Spanish faster! 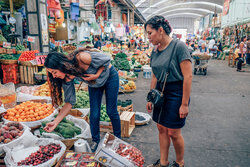 If you really want to learn Spanish, plan your next vacation to your desired Spanish-speaking country and take some local courses. You may have an array of excuses why “immersion” is out of the realm of possibility - that it will be too expensive or that your family won’t be interested in doing the same things as you. But where there’s a will, there’s a way! There are a ton of destinations in Latin America that offer a little bit of something for everybody at an affordable price - Spanish-language courses, beach, great food, excursions etc. Don’t know where to start your search? Take a look at San Cristóbal de Las Casas, Puebla, Puerto Vallarta (México), Antigua (Guatemala) or pretty much anywhere in Costa Rica. Even if it’s just for a week or two, you will be amazed how much you will learn through immersion. Even better, involve the whole family in the language learning!

Tip #2 Fall back on Spanglish in desperate times

If you’re traveling through Latin America, you will notice that there have been many words adapted from English into the Spanish language. Further, many Latin Americans have at least heard a fair amount of English in popular culture, especially in Mexico, due to it’s proximity to the US. Here are some useful vocabulary tricks to remember (keep in mind that these are not universal rules, but are common):

Note: that if you are looking to speak fluent Spanish, you will, at some point, need to move away from speaking Spanglish. Also, keep in mind that there is far less English influence in Spain and South America (like Argentina for example) and thus, Spanglish might not get you as far when speaking in those locations.

Tip #3 If you don’t know the word, describe it!

Apart from learning key phrases, like “¿Dónde está el baño?” it is a good thing to memorize a few expressions to describe what you’re looking for. Even if you don’t know the word in Spanish, it is a very useful skill to be able to explain it. Rely on adjectives, indefinite articles, like algo/una cosa (something) or alguien (someone), as well as verbs, to describe what the item is used for. Here are some useful phrases as well as examples of how to use them.

You need aspirin for a headache:

Work on developing an ear for Spanish. Chances are, you will need to depend more on your listening and comprehension skills, than your speaking skills at first. In other words, there is a higher probability that while traveling, you will have things explained and described to you by locals rather than you having to do much talking. Start listening to a podcast or Spanish music as soon as possible. Down the road, as your Spanish improves, you can start to incorporate Spanish movies with subtitles.

Tip #5 Be prepared to hear different vocabulary, slang and regionalisms depending on the country you go to

You spent the summer learning Spanish in Mexico and you are feeling extra confident when you arrive to Antigua, Guatemala. You sit down at a restaurant and kindly ask for a popote with your jugo. The waiter looks at you perplexed and you start to feel a little confused as well. I mean, you just spent the last three months asking for a straw saying popote and hadn’t had any trouble. Turns out, straw in Guatemala is called pajilla. In Spain, it is pajita, in Peru sorbete, in Chile bombilla and the list goes on.

Regionalisms and slang can cause confusion and frustration to the Spanish novice however, what many don’t realize is that non-native speakers have a unique choice. If you are a native speaker of a language you have acquired that language from birth. You have an accent and use certain regionalisms naturally and without thought, which is something that’s hard to change.

As a non-native speaker of a language, you are given a great power of choice in your vocabulary, structure and accent, as you gain fluency. One option is to exclusively use the slang and expressions from the country where you learned Spanish, in order to show pride and give yourself a sort of “Spanish identity.” Another option (and the more recommended one) is to file away certain words and expressions and to then adapt your Spanish to the country in which you are traveling. This option makes your Spanish more worldly.

Language learning has come a long way since the days of working out of a textbook and doing dictation exercises. It has transformed into something much more interactive with both free and inexpensive tools on the internet. Here are some fun ways to incorporate Spanish into your daily life without out having to put in much effort:

Refer to these six steps along your Spanish learning journey and you’ll be speaking fluently in no-time!