Vocabulary Words for Weather in Spanish

Picture this: You are alone waiting for the bus and someone stands next to you, or maybe you get in an elevator and someone is already there. They nod, and you want to strike up some conversation, so you decide to comment on everyone's go-to topic, the weather. There's just one problem, the other person only speaks Spanish.

Being able to discuss the weather is a good skill to have in your toolbox. Whether you want to know what to pack for your next holiday destination or you are just looking to make some small talk, here are some words and expressions that are sure to come in handy. 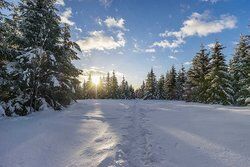 Describing the Weather in Spanish

To get you started, the following list details some basic words that are likely to come up in a conversation about the weather.

Spanish nouns can be masculine or feminine; look at the article to know which one you are dealing with.

Pair these adjectives with the verb estar (to be) to discuss the weather, for instance:

Some weather conditions have their own verbs, for example:

Verbs like these are quite special in Spanish, since they are rarely conjugated in anything other than the third person singular and the subject is not specified. Here are some examples that illustrate that:

In some other cases, you may have to pair some of the above nouns and adjectives with other verbs. Some of the most common verbs used in these cases are estar (used for adjectives as mentioned above), haber (there is) and hacer (to do). You can see some of those in action below:

So let's go back to that initial situation. What might that conversation at the bus stop or the elevator sound like? It could be something like this:

In a more or less literal translation into English, it would sound something like this:

B: I don't know, the forecast says that rain is not expected, but it's very humid.

A: Yes, and there are a lot of gray clouds. It might rain tomorrow.

Saying the Temperature in Spanish

Sometimes when discussing the weather, you may want to talk about the temperature. If you're surprised by how low temperatures seem when you look at forecasts for Spanish speaking countries, make sure you are using the right scale: Spanish speakers prefer Celsius over Fahrenheit.

This means that a 30 degree forecast is actually quite toasty (86 degrees Fahrenheit), while temperatures can easily get as low as 10 degrees (about 50 Fahrenheit) even in warmer areas.

Depending on where you are, there are a couple of ways to say the temperature in Spanish. The most common ones are using either the verb estar or the verb hacer. So, if it's hot you might say something like:

Both these phrases translate to:

In some regions, the verb haber is also used, so on a cold day you might hear something like:

Talking About Weather Around the World

Remember that even though people associate Spanish with tropical countries, Spanish is one of the most widely spoken languages in the world. In fact, you'll find people speaking Spanish everywhere from snowy mountains to golden beaches.

Finally, although local variations like the one in the previous section are common with everyday topics, the expressions in this article should have you covered in just about any Spanish speaking country. Look out for new colorful expressions to spice up your vocabulary and sound like a true local!