As a Spanish learner, it’s not coincidental that one of the first words you learn in this language is the word gracias. Besides being a really useful thing to say in any given situation, it is a rather easy word to remember.

However, there are several variations of this word that can help you sound more like a native speaker and, of course, appear more polite to everyone around you. At the end of the day, there are many ways to express gratitude in Spanish and gratefulness will never go out of style. 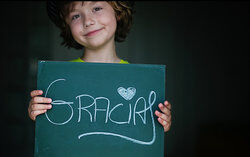 Ways to Express Gratitude in Spanish

This simple thank you is the easiest and most common way of expressing gratitude in Spanish. You can use it in pretty much any context or situation.

¿Puedes pasarme ese libro? ¡Gracias! -- Can you pass me that book? Thank you!

Mil gracias - Thanks a lot/thank you so much

It literally means ‘‘a thousand thank yous.’’ As you would think, this one is used to place emphasis on how grateful you are to someone for doing something really nice for you or helping you out in a difficult situation. There are people who might use it just as the very common gracias though. It all depends on the situation or the person.

Mil gracias por el regalo. Lo aprecio mucho. – Thank you so much for the gift. I really appreciate it.

Te agradezco por - I am grateful for

Notice how in this case gracias is used as a verb (agradecer). Used to express gratefulness for a very specific thing or situation, this one is a personal favorite among native Spanish speakers. It makes your comment about being grateful look more honest. This can also be said as estoy agradecido por.

Te agradezco por todo lo que has hecho por mí. - I am grateful for everything you have done for me.

This expression is used to give thanks or show gratitude for something that hasn’t been done yet and will be done in the future. In English, this phrase sometimes adds an expectation of help and it can be considered a little presumptuous. However, in Spanish, it’s a pretty normal thing to say at the end of a conversation or email.

¿Podrías por favor enviarme el reporte esta tarde? Gracias de antemano. - Could you please send me the report by this afternoon? Thank you in advance.

Gracias a Dios is pretty transparent. It is used to express gratitude as if you were speaking to God Himself. This one is used in many Spanish-speaking countries, especially in Latin America.

Llegaste a salvo a casa. ¡Gracias a Dios! -- You got home safely. Thank God!

This one is closely related to the phrase te agradezco por. However, me siento agradecido contains the reflexive verb sentirse ‘‘to feel’’ plus the adjective agradecido/a. You can make this expression formal or informal; it all depends on the situation and the person to whom you are speaking.

Gracias por nada - Thanks for nothing

In a world where context determines pretty much everything gracias can also be used to express ingratitude or sarcastically dismiss someone’s efforts to help you. The phrase gracias por nada is used to express discontent when someone fails in helping you either intentionally or unintentionally.

Ya conseguí el libro que se suponía que ibas a traer. Gracias por nada. - I already found the book that you were supposed to bring. Thanks for nothing.

In several ways, you will probably be faced with situations where you’ll have to thank someone for something or be thanked by someone. Make sure your Spanish skills are on point when that happens, and with the use of these phrases you’re one step closer to achieving a more native-like level.