Spanish accents or tildes are orthographic marks that usually determine the stress of a word. You will find these accents placed on the five vowels á, é, í, ó, ú. Accent marks are really important in Spanish writing because sometimes two words can be spelled exactly the same, and only the presence of one of these marks will help you differentiate them.

In terms of Spanish sounds, knowing how letters are pronounced in a certain word is just one aspect of mastering pronunciation. Syllable stress is also something you will want to keep an eye out for. Luckily for Spanish learners, the rules for orthographic accents are pretty straightforward and apply to almost every word.

It is important to remember that all Spanish words carry accents, but not all of them are orthographic ones. 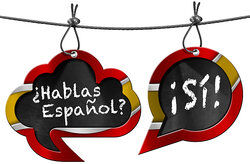 In Spanish, words are classified according to the place where the accent, or tilde, is written. As stated before, accents carry the stress of a word. There are four types of words classified into accents: agudas, graves, esdrújulas, and sobresdrújulas. If these classifications are difficult for you to remember, you can compare the first three to the English versions: oxytone, paroxytone, and proparoxytone, respectively. However, there is no close equivalent for sobresdrújulas. Let’s take a closer look at each type of accent.

These words have an orthographic accent placed in the last syllable. If a word ends in a vowel, n, or s and is stressed in the final syllable, it requires a written accent.

Esdrújulas have an orthographic accent placed in the antepenultimate, or third-from-the-end, syllable. These words always have a written accent, there are no exceptions.

These words have an accent in the fourth-to-last syllable. Like esdrújulas, these words carry a written accent all the time. Also, sobresdrújulas come in the form of direct and indirect objects, as well as adverbs.

Forgetting or overlooking orthographic accents is not an option for Spanish learners. There are several words that can be differentiated by adding them. For instance:

Stick to the Rules

As you can see, the rules for adding orthographic accents in Spanish are straightforward once you get the hang of them, and they apply to most words. Knowing them will not only improve your grasp of grammar but also your vocabulary.