Mood is a grammatical concept that organizes verb tenses. It refers to the different ways in which the action of a verb can be expressed. The three moods in Spanish are the indicative mood, the subjunctive mood and the imperative mood. Aside from the imperative mood, which is only conjugated in the present tense, all tenses can be conjugated differently in both the indicative and subjunctive moods. Therefore, mood has a lot of influence when conjugating verbs in Spanish and thus, is an important concept to understand. 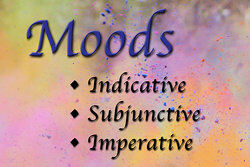 Example Sentences for the Indicative Mood:

The subjunctive mood is characterized by expressing actions or ideas that are hypothetical and not concrete. These can be in the form of subjective statements and opinions as well as desires, hopes and wishes. The subjunctive mood is used a lot more in Spanish than it is in English so it can sometimes be a tricky concept for native English speakers.

Example Sentences for the Subjunctive Mood:

The imperative mood is characterized by making demands and giving direct orders. Only the present tense is used to express the imperative mood. Also, since demands are always made to another person there is no conjugation for the “yo” form.

Example Sentences for the Imperative Mood: