Have you ever thought about the user-friendly quality of contractions in languages such as English and Spanish? Maybe not, but in most cases, contractions help speakers achieve effective communication in conversation. You are less likely to stumble over your own words, and it saves you articulation work. Besides squeezing words together, contractions also help the speaker engage the interlocutor, which is why many people use them every day.

As a speaker of any language, you probably don’t want your sentences to sound wordy all the time, do you? Try using contractions for a more informal, chatty tone. Unless, of course, you are in an academic or formal setting. 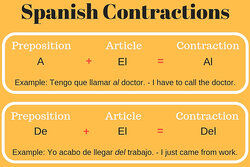 What Are the Spanish Contractions?

In Spanish, there are only two contractions, al and del, and they exist to help you avoid tripping over awkward sentence constructions.

Mastering the use of these two Spanish contractions is essential because they are not optional, as they are in English. Anywhere you are going to have a and el or de and el together in a sentence, they must be contracted. Luckily, the grammar behind them is pretty straightforward, so understanding Spanish contractions shouldn’t be difficult.

So, the first Spanish contraction you should familiarize yourself with is al, which is a contraction of the preposition a (to) and the article el (the). This contraction normally expresses an action that a masculine word receives. It can be used to mean several things, such as “at the” or “to the.”

You do not form a contraction with a and the other articles la, los, and las. This only occurs with the article el.

The second Spanish contraction to be on the lookout for is del. Much like al, del is formed from the contraction of a preposition, de (of), and the article el (the), and is used to express an action or thing that comes from a masculine word. Del can be used to mean several things, such as “from the” or “of the.”

Note that the last example expresses possession. Spanish doesn’t have an equivalent of the English possessive apostrophe + s, instead the object is followed by de.

An Exception to the Rule

As you can see, understanding Spanish contractions isn’t hard. Using these two little words will much improve your Spanish fluency and grammar.

Now, having said that a + el and de + el must always be contracted, as with all good grammar, there is an exception. If the el is part of a proper noun, such as El Salvador, then it is not contracted. With that in mind, you’re now ready to try out using al and del.