Interestingly, unlike some other Latin-based languages, possessive adjectives in Spanish do not change according to gender if the noun is singular. In terms of word order, they are usually placed before the noun. 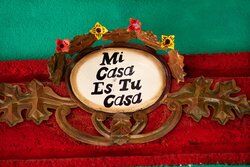 Here are some basic examples to get you started.

This set of adjectives is used to express ownership in general. They, of course, must agree with the noun they are describing in terms of gender and number. As you will see, there are only two forms that have distinct masculine and feminine forms. These adjectives are somewhat similar to their English counterparts with singular and plural forms.

You can see how these possessive adjectives work in these example sentences:

The forms vuestro(s) and vuestra(s) are only used in Spain and are less common elsewhere.

When it comes to this set of pronouns, things change a little bit. First, they are often used to emphasize someone’s ownership or a personal relationship, or to contrast with another owner. They are usually placed after the noun they are referring to. These adjectives should always match the noun they are modifying.

Here are some examples.

See how clingy these words are? After reading this article, you now understand how ownership works in Spanish, the types of words you have to use, and their placement in a sentence. Keep practicing and learning Spanish every day!