When to Use the Imperfect Tense in Spanish

One of the trickiest tenses to learn in Spanish is the Imperfect (or el imperfecto). Although its conjugations are relatively straightforward, its use can be complicated. One reason for the complexity is the Imperfect tense, as it’s used in Spanish, does not really exist in English. 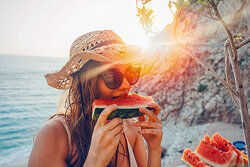 Not to worry though! This guide will walk you through this difficult tense and unlock all the answers to your most pressing questions concerning the Imperfect.

When to Use the Imperfect

The Imperfect is used to talk about past actions. However, as opposed to the Preterite tense, the Imperfect tense emphasizes a repetitiveness or continuity of time. This can most easily be translated into English as “was doing something, would do something or used to do something.” Let’s take a look at some general uses of the Imperfect along with some examples:

Use #1: to describe a situation, a setting or a person in the past

Use #2: to describe a repeated action, habit or custom in the past

Use #3: to describe an action that was in process before another action interrupted it

Llamaste cuando me bañaba. → You called when I was taking a shower.
Mientras cocinabas, me fui a correr. → While you were cooking, I went for a run.
Pensé en ti muchas veces mientras/cuando estudiabas en Londres. → I thought of you many times while/when you were studying in London.

Use #4: to describe when two actions were happening simultaneously in the past

Phrases that Signal the Imperfect

The following expressions are typically used to express the Imperfect tense.

Idioms and Other Uses of the Imperfect

Apart from the most common uses, there are several idioms and expressions that utilize the Imperfect.

¿Qué deseaba? → What would you like?
¿Quería preguntar si… → I wanted to ask if…
Dígame, ¿qué buscaba? → What are you looking for?
Veníamos a la cita programada. → We are here for the scheduled appointment.

Iban a recogerme pero se estropeó su coche. → They were going to pick me up but their car broke down.
Íbamos a ver la película pero se agotaron las entradas. → We were going to see the movie but it was sold out.
Iba a llamarte pero se fue la señal. → I was going to call you but I didn’t have service/I lost the signal.

With this guide a la mano, at hand, you will be able to breeze through correctly using the Imperfect tense in various situations.