20 Most Common Irregular Verbs in Spanish

Conjugating verbs is arguably one of the most daunting parts of learning Spanish. When it comes to regular verbs, things are quite simple. But, irregular verbs, on the other hand, will have you exercising your memory. 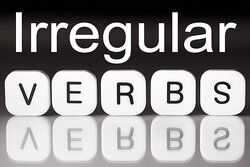 So, with so many verbs, which should you focus on? Here are the 20 most common irregular verbs in Spanish with their present tense conjugations and some examples of their use.

It should come as no surprise that a verb meaning "to be" is the most common verb in Spanish. Ser is used for permanent characteristics or things that are expected to last. It can also be used to tell the time, to describe someone's origin or profession, or to discuss a relationship.

Ser is a really important verb in Spanish, so you might want to learn more about it and see more ser conjugations.

The verb estar also translates into English as "to be". The difference between ser and estar is often a tricky subject for Spanish learners. While ser is preferred for more permanent situations, estar tends to be used for passing ones. To be more specific, estar is generally used for things like position, location, action, condition and emotion (often memorized with the acronym PLACE).

Haber can be translated as "to have" when it is used as an auxiliary verb to form many verb tenses. It can also be translated as "have" or "must" when paired with que to express obligation. Finally, it can also be used in constructions equivalent to "there is" or "there are" in English. In these last two situations, it is often used in its impersonal form: hay.

Just like ser and estar can both be translated as "to be", haber and tener can both be translated as "to have". That said, haber is almost always used as an auxiliary verb, while tener is used on its own to indicate possession of something. Other common uses of tener include indicating age, "to hold", and "must", as you will see in the examples below.

Poder is often used as an auxiliary verb paired with infinitives to indicate the capability, permission or even possibility of doing something. Its meaning is similar to that of English modal verbs like "can" or "may".

Depending on the context, hacer can be translated into many English verbs, but its most common uses are "to do" and "to make". When used as a reflexive verb, it can also mean to act as something or somebody else.

Decir is one of the most straightforward verbs in the list; it most commonly means "to say" or "to tell".

Ir usually means to go, although, when used as a reflexive verb, it can also mean to leave.

Ver is all about seeing, so it can mean to see, to watch and even to witness.

Parecer is usually translated as "to seem" or "to look (like)". In some contexts, it can also be used to express an opinion, similarly to the verb "to think".

The most common meanings of this useful Spanish irregular verb are "to give", "to produce/yield" and "to grant".

The verb saber lives a bit of a double life. As you will see in the examples below, it can mean "to know", but it can also mean "to taste" (as in, to have a specific taste).

Querer can have a few different meanings, the most common ones being to love, to want and to mean.

Jugar means "to play", as in playing a game or having fun in some other way. Unlike the English verb, jugar is not used in the context of playing an instrument or playing a character in a play or movie.

The most common meaning for encontrar is "to find", "to discover" or "to encounter". As a reflexive verb, it can be use to describe meeting someone. In some cases, it can be used to mean "to be" in a place or state.

Like saber, conocer can sometimes be translated as "to know", but it is closer to "to be familiar with" than saber is. It can also mean to meet someone or to discover or visit a thing or place.

Pensar usually means "to think" but, depending on the context, it can sometimes be translated as "to plan".

Poner is a pretty straightforward verb for English speakers, it usually translates into "to put."

There are a lot of irregular verbs and they might seem hard to memorize, but, as you read and speak Spanish more often, you'll find it isn't as hard as it may seem. Beginning with these popular and commonly used verbs will give you a great start.