We all love to eat and therefore, comer, the Spanish verb meaning “to eat,” will be an important verb to learn to conjugate. Comer is a very common verb and you will find yourself using it several times a day. 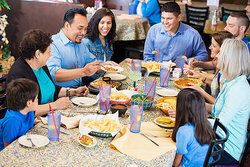 Luckily, comer is a perfectly regular -er verb. Here are the conjugations for comer in several common verb tenses.

Si no estuviera a dieta, comería una hamburguesa con papas. → If I wasn’t on a diet, I would eat a hamburger with french fries.

The reflexive form of comer, comerse, is used to express the action of “eating whole/entire thing.” It is often used in the imperative form and followed with the word todo, meaning “everything,” to add emphasis. For example, a mother may say to her son who isn’t eating his dinner:

Equally, if you are looking at a nice, big piece of chocolate cake you may say:

¡Me voy a comerlo todo! → I am going to eat the whole thing!

It can also mean, “go ahead and finish it” when people are wondering who is going to finish the last bite of something. As a sign of respect to an elderly member of the family, you may say:

By familiarizing yourself with the conjugations of comer in various tenses as well as how to use it in the reflexive form, you’ll never go hungry in a Spanish speaking country!