Hacer is a really important verb in Spanish. Most of the time, it means "to make" or "to do". The dictionary of the Royal Academy of Spanish lists over 50 different meanings for hacer. This is because it is a sort of "umbrella" verb that can be used to convey many verbs with similar, but more specific meanings, like "to produce", "to build" or "to execute". 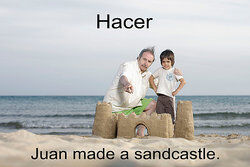 It can also be used in weather-related expressions like hace frío (it's cold) or hace calor (it's hot), and it can even mean "to play" in phrases like hacerse el tonto (to play the fool). Other common expressions that use this verb include hacerse tarde (to become late), hacerse de algo (to gain possession of something), hace mucho tiempo (a long time ago) and hacer de las suyas (to be up to his/her/their old tricks).

Although one of the most common verbs in Spanish, hacer is an irregular verb, which means you might have to memorize some of its conjugations. It will be worth it, though, as you will be using it more often than you think. Use the tables and examples below to practice.

Once you've learned to use and conjugate the verb hacer, you can move on to other common verbs and build up your Spanish vocabulary!