The verb jugar means “to play” in Spanish. It is a popular verb used with sports and children and so it is one you will hear and use often. Jugar is an irregular verb so pay close attention to its modifications in different tenses. 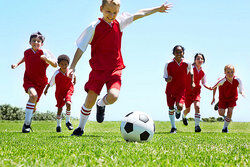 The verb jugar is irregular in the present tense. It’s stem changes from o → ue in all conjugations except for the nosotros and vosotros forms.

Whether you’re playing sports or playing a game, jugar is a fun verb to work into your Spanish vocabulary. There is no doubt, however, that it will be one of the essential verbs you will need to master when first learning Spanish.