The imperfect tense combines a past tense action with a continuous quality. It is used to talk about habitual actions, times and dates and age as well as to describe feelings, emotions and surroundings in the past. This verb tense does not exist in English and thus, is often confused with the preterite tense and vice versa. It can most easily be translated to “was + doing something” or “used to + do something” in English. The good news is, though, that the imperfect tense is one of the few tenses with no irregular verbs! 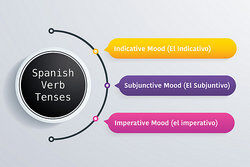 The conditional is a common tense used, 1.) when talking about future time in the past, 2.) to increase the politeness of a request and, 3.) when using “if clauses” with the subjunctive.

The Conditional Perfect is most commonly used when talking about hypothetical or unreal situations in the past. For example: I would have gone to the party. → Yo habría ido a la fiesta.

The Past Perfect is used to indicate an action in the past that occurred before another action. This is a commonly spoken tense, especially when describing a story in the past. For example: I had already left when you arrived. → Ya me había ido cuando llegaste.

The Preterite Perfect, like the Past Perfect, is also used to indicate an action in the past that occurred before another action. This tense is rarely spoken and mostly exists in written form.

The Future Perfect is used to talk about things that will have happened in future after a different event occurs. For example: I will have finished my exam by 4:00 pm. → Ya habré terminado el examen a las 4:00.

The Imperfect Progressive is used to talk about something that you were doing in the past which is often times interrupted by the an action in the Preterite Tense. For example: I was taking a shower when you called. → Me estaba duchando cuando llamaste.

The Past Progressive is similar to the Imperfect Progressive in that it refers to an action that you were doing in the past. However, it stresses that the action was completed when interrupted by the next action. For example: I saw him when we were driving. → Lo vi cuando estuvimos manejando.

The Future Progressive is used to express that an action will be occurring in the future. For example: If you need anything, I will be working on the computer in the other room. → Si necesitas algo, estaré trabajando en la computadora en el otro salon.

The Conditional Progressive is used to express what would be happening at any moment in time and is oftentimes used with “if clauses.” For example: If I were in Spain, I would be drinking wine. → Si estuviera en España, estaría tomando vino.

The Present Perfect Subjunctive follows the same rules of the other subjunctive tenses in terms of expressing doubt, however it is only used when the dependent clause of the sentence is in the past tense. For example: I doubt that they have left. → Dudo que hayan salido.

In Spanish, there is a special way to conjugate verbs when asking someone or a group of people to do or not to do something. In essence, the Imperative Mood refers to giving commands or making requests.

The Affirmative tense is used when you are asking someone or a group of people to do something. For example: Do your homework! → ¡Haga la tarea!

The Negative tense is used when you are asking someone or a group of people not to do something. For example: Don’t climb the tree! → ¡No subas el árbol!

Now you are familiar with all of verb tenses you will need to master to become fluent in Spanish. Before you know it, you’ll be effortlessly conjugating verbs just like a native speaker!