To many students, learning to conjugate Spanish verbs might look like a daunting task. Grammar books often feature long intimidating lists of conjugated verbs, but don't let that scare you! There's a method behind the madness.

Instead of trying to memorize each verb and its conjugations individually, you can start by focusing on regular verbs. Why regular verbs? Because these follow clear rules that are simple to use and easy to remember. Learn them, and Spanish conjugations will be a breeze! 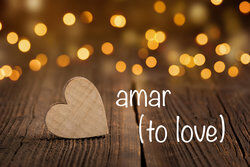 The first step to conjugating Spanish verbs is learning to categorize them. To do so, you should first note that Spanish verbs are made up of a stem and an ending.

In their basic or "infinitive" form, all Spanish verbs can have one of three endings: "-ar", "-er" or "-ir". This is what you will use to put them into one of the three following categories:

Dropping the infinitive ending will reveal a verb's stem. For instance, by dropping the "-ar" in amar you will get the stem "am-".

When you conjugate a regular verb, its stem will remain unchanged, but its ending will vary according to the subject (i.e., the thing or person that performs the action).

Since the subject is often expressed with a pronoun, let's review the personal pronouns in Spanish:

Depending on where you are and who you're talking to, you might also use:

Each of these pronouns will trigger a change in the verb's ending.

The beauty of regular verbs is that these changes follow regular patterns determined by their infinitive form. As a result, all you have to do to conjugate regular verbs in Spanish is learn three sets of conjugation patterns (one for each verb category).

Seems easy enough, right? Let's take a look at how this works in the present.

This is the conjugation of the verb "amar" (to love) in the present:

You can see that the verb's stem, "am-", remains constant throughout the conjugations. The ending, however, changes to match each pronoun.

All regular verbs ending in "-ar" will change following the same pattern as amar. All you need to do to conjugate other regular verbs in this category is identify their stem and add the corresponding ending.

For instance, to conjugate the verb cantar with nosotros, couple its stem, "cant-", with the ending for nosotros, -amos. You will then get nosotros cantamos.

Use different pronouns and try this out with other regular verbs ending in "-ar" like bailar (to dance), llamar (to call), mirar (to look), dibujar (to draw) and estudiar (to study).

Here is the conjugation of the verb comer (to eat) in the present:

Just like with the "-ar" verbs, you need only look at the endings in the above examples to understand how to conjugate all regular verbs ending in "-er" in the present.

You now know the correct way of conjugating a verb like correr (to run) with pronouns like yo or ellos . This is, of course, yo corro and ellos corren.

Here are some other verbs ending in "-er" you can use to practice: temer (to fear), leer (to read), creer (to believe), responder (to answer) and barrer (to sweep).

Last but not least, let's look at the conjugation for vivir (to live) in the present:

Following the same logic as the other two examples, you can work out that to say "they write" in Spanish you will need to combine the stem of the verb escribir (that is, "escrib-") with the ending "-en". They write , then, will become ellos escriben.

Other verbs that follow the same pattern in the present are: compartir (to share), unir (to join), existir (to exist), recibir (to receive) and decidir (to decide).

Now that you've learned these rules, Spanish verbs shouldn't be as intimidating. Go ahead and use this newfound courage to delve deeper into the wonderful world of Spanish language!