When you start learning Spanish, you're bound to come across the verb tener. It is usually translated as "to have", since is conveys meanings such as "to possess" and "to carry", but the meaning of tener is much broader. 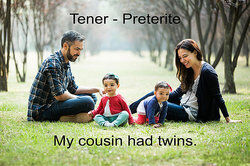 This verb can also be used to talk about someone's age, to describe feelings such as being hungry, hot, or cold, and as a possible translation for "to hold", among other things.

Tener can also be used as an auxiliary verb that expresses obligation or supposition when paired with que:

Tener is quite irregular in its conjugation, so pay attention to the following sections to learn how to properly use it in these tenses.

As you can see, tener is a very versatile verb that can be used in a lot of different situations. So, even though it is irregular, it's worth the effort of learning and memorizing how to properly conjugate it.