The verb tocar means to “to touch” in English. Also, tocar un instrumento means, “to play an instrument.” Being one of the 5 senses, or cinco sentidos, as well as the verb that is used with instruments, tocar is very common and so it’s important to add it to your vocabulary early on. 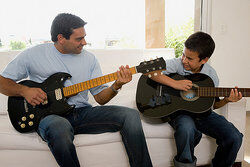 Luckily, tocar is a regular verb in all tenses and follows all the regular conjugation rules. In the preterite “yo” form, there is a one small spelling change, c → qu, but this is only to maintain the correct sound.

Surprisingly, the verb tocar can translate to many other verbs such as “ring, knock and honk.” Here is a list of phrases with the verb tocar that you might hear among native-speakers. Make note of the ones that you may want to use in the future!

Now that you have a list of the most used conjugations of tocar as well as some key idiomatic expressions, you can feel comfortable using it in your everyday conversations.