You could say usar is one of the most useful verbs in Spanish, since its meaning happens to be "to use". If it sounds familiar, it's because both the Spanish and the English verb share a common Latin ancestor. 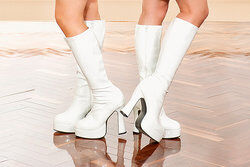 Platform shoes were in fashion in the 90s.

However, usar does have some aspects that set it apart from its English cousin. For instance, usar can take on the meaning of "to wear" in phrases like estoy usando el vestido que me regalaste (I'm wearing the dress you gave me).

There is yet another use to usar which is probably derived from the above: usar can mean "to be in fashion" in phrases like en los 90 se usaban zapatos de plataforma (platform shoes were in fashion in the 90s).

Although surprising for such a short and common verb, usar is regular in all its conjugations. You can learn the rules of regular Spanish conjugations here, but we've laid out all the forms of usar in the indicative mood in the tables below so you can practice.

Keep including usar in your Spanish conversations and you will soon find yourself conjugating it effortlessly.