Ver is a very common Spanish verb and, while its closest equivalent in English is "to see", it can have a lot of different meanings. 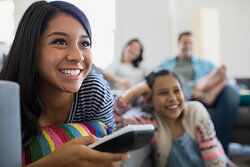 You will even come across it in some common Spanish expressions such as ¡Nos vemos! (See you!), no lo vi venir (I didn't see that coming), a ver (let's see) and veremos (we shall see).

Ver is an irregular verb, as you will notice in some forms of the present and the preterite, as well as in its imperfect conjugation. Luckily, though, it is regular in its conditional and future conjugations and, as you will see in the following examples, even its irregularities are not hard to learn.

Ver might only be three letters long, but you will find it's extremely useful in a lot of different situations, so study the examples and conjugations above to learn how and when to use it.